Antimicrobial resistance occurs when microbes – bacteria, fungi, viruses, and parasites are able to evade the effectiveness of antimicrobial used to combat the infections caused by these microbes. It takes full effect when a mutation occurs in the genome of the microbe and it is able to synthesize proteins that can perform this function.

According to WHO, antimicrobial resistance remains a threat to the management of diseases as it threatens the effective prevention and treatment of an ever-increasing range of infections caused by microbes. Despite active research in this area of biology, microbes have developed resistance to almost all of the commonly used antimicrobials and the mechanism used is specific to each microbe.

This project aims to identify the beta-lactam, tetracycline, and aminoglycoside resistance pattern present in Staphylococcus aureus in five countries in the world. Our results will provide clues on the resistance pattern in each of these countries and the types of antibiotics that should be prescribed to patients infected by S. aureus in these regions.

Data collection: Whole Genome Sequencing (WGS) of S. aureus from five countries – Argentina, Canada, China, Nigeria, and Russia were retrieved. The SRR/ERR IDs, that is, the run accessions for the actual sequencing data of each experiment to be used per country were retrieved from NCBI (https://www.ncbi.nlm.nih.gov/guide/sitemap) a public biological database.

The SRR/ERR IDs were then used to retrieve the datasets and their metadata from the Sequence Read Archive (SRA), an open and free access repository of high throughput sequencing data (https://sra-explorer.info/). The selected countries in this project represent the most populated or second most populated countries in five continents – South America, North America, Asia, Africa, and Europe respectively and ninety-eight (98) reads were retrieved in total.

Post assembly, the contigs of each sequence were renamed to have their SRR/ERR IDs for easy identification and they were then uploaded to ResFinder (Florensa et al., 2022; https://cge.cbs.dtu.dk/services/ResFinder/), an open online resource for identification of antimicrobial resistance genes in high-throughput sequencing data and prediction of phenotypes from genotypes. A 90% ID threshold was used alongside a 60% minimum length. The resistance genes for beta-lactam, tetracycline, and aminoglycosides were compiled into a CSV file.

Note: In the Linux pipeline, the datasets were worked on country by country, hence the directories were created based on country identity and the major codes remained the same.

This analysis revealed a prevalence of mecA, a beta-lactam resistant gene against cefoxitin, and blaZ, a beta-lactam resistant gene against penicillin, and variants of tet genes against tetracycline in the five countries (Link to SRR IDs of the dataset and the distribution of the ARGs where 1 means positive and 0 means negative ). The prevalence of penicillin-resistant genes confirms the report of previous studies that have addressed the reduced potency of penicillin as a drug of choice.

Reads from China (Link to the table showing country by the country distribution of genes ) contained a high amount (up to 50%) of aminoglycoside resistance genes which were specific to amikacin, tobramycin, and gentamicin when compared to the other countries (Fig. 1, Fig 2).

The project showed that while aminoglycosides can be used as a drug of choice in combating staphylococcal infection in Russia, Canada, Argentina, and Nigeria, the use of beta-lactams should be reduced to avoid the spread of antimicrobial resistance genes. Table 2 (Link to SRR IDs of the dataset and the distribution of the ARGs where 1 means positive and 0 means negative ) shows the occurrence of each resistance gene in all of the sample datasets. It is worthy to note that the resistance genes in each country’s dataset were of the same or similar origin and these had between 99.89% and 100% identity. 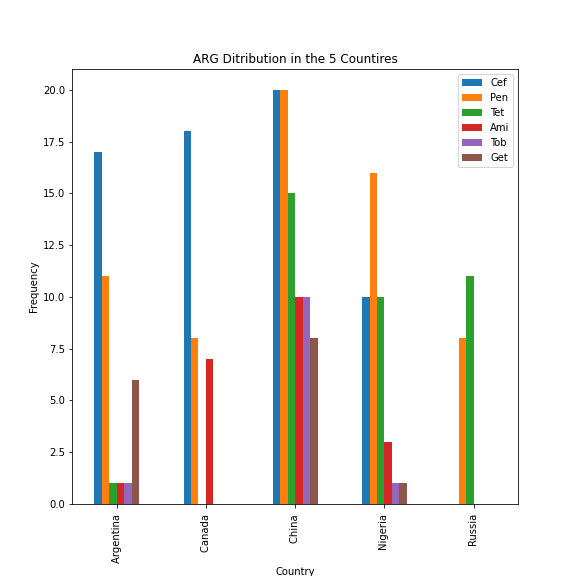 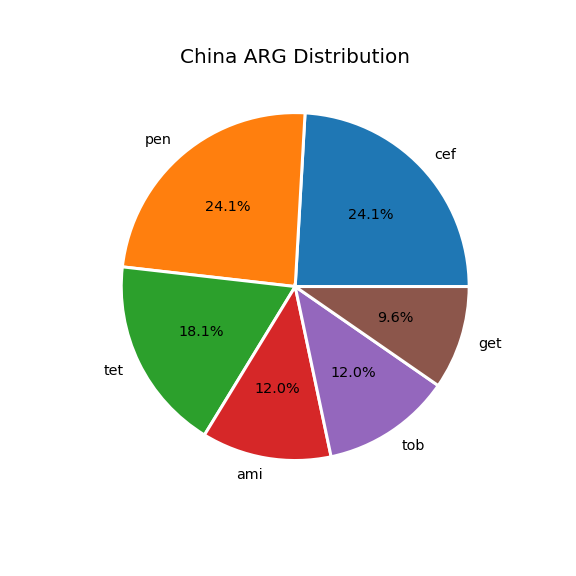